Let me ask you a few questions.

What is a sound wave?

What is the difference between transverse wave and longitudinal one?

And why does it matter?

It matters because it is a fundamental knowledge of sound. You can’t write a book without knowledge of the alphabet, right? Well, I guess you could. But it’s much easier to know the letters. Anyway, let’s start with something basic, a waveform.

What is a waveform and how do we describe it in modern, digitalized world? 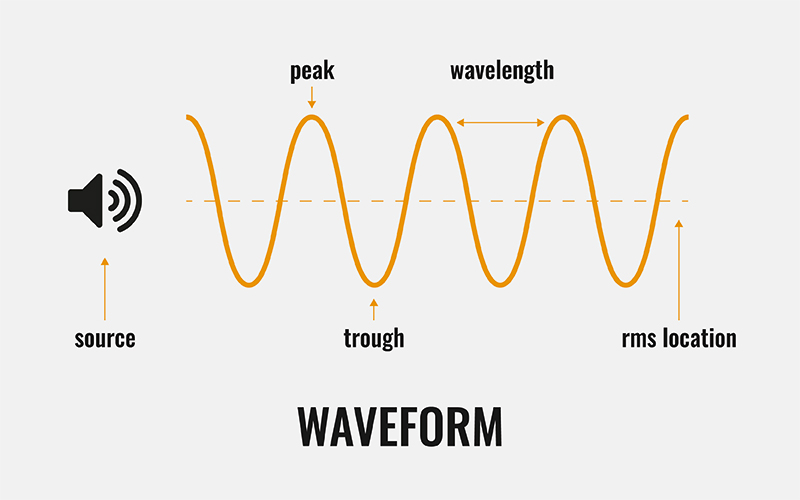 Let’s start with physics. So the picture represents a sound wave. Now, notice that I said “represents” a sound wave. It doesn’t really look like it. A sound wave is a disturbance of particles within a medium. A medium can be anything like air, water or steel.

If you got one nearby, grab the first coil and move it back and forth. It will create a disturbance. The first loop will push and pull on the second coil that then displaces the third one and so on.

So the energy introduced into the first coil is carried by a medium, our slinky, from one location to another. It is important to remember that.

It is only a representation of sound. We use a sine wave to portray the sinusoidal nature of the pressure-time variations. In simpler words, it’s easier to imagine a wave in this way. It does, sort of, look like a wave. In reality, sound passes through a medium and disturbs particles in the longitudinal, linear motion. 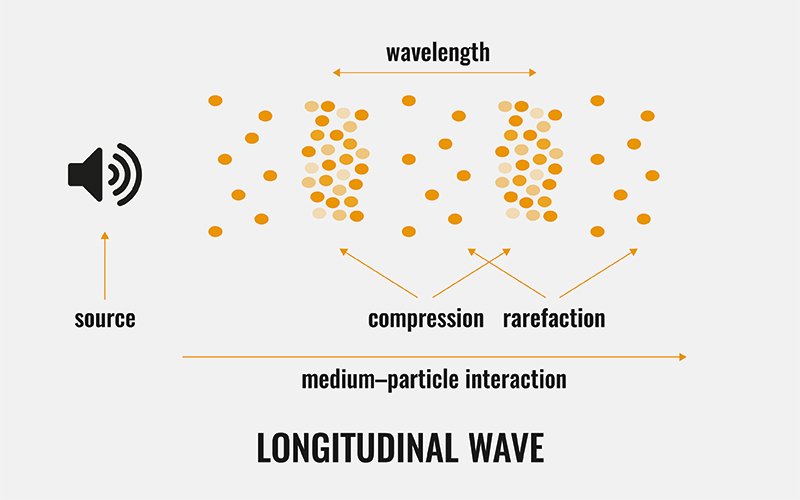 If you need to remember one definition of a sound, memorise this:

The sound is a longitudinal wave with compressions and rarefactions.

Let’s go back to the pictures and have a look at some of the details. First, we have a source of the wave. We can describe the source as a body that disturbs the first particle of the medium. A source can be anything that vibrates. So if you play the guitar, the string will vibrate. If you sing – your vocal chords do the job.

Yes, your computer makes the diaphragm of a speaker vibrate. Now, we have created a disturbance in a medium. But what it is exactly? A medium is just a term for a bunch of particles bundled together. They stay near each other, and they collaborate with each other.

So as I said before, a medium can be anything that will carry the energy, particle disturbance, forward. It can be anything, but the air is always our first bet.

Now, under the picture, I wrote medium – particle interaction.

I want you to understand why we define a sound wave as a mechanical wave. The energy, our sound wave, is moved from one place to another by particle interaction in a medium. Let’s say the medium is air.

Ok, but what is a transverse wave?

And what is the difference?

In a transverse wave, the oscillations happen at the right angle to the movement of the energy. So if you know Indiana Jones and his whip, you will remember that the wave travelled on one side. It doesn’t go up and down when he uses it. Light is a transverse wave and so is a ripple in a pond.

Let’s go back to the characteristics of our sound wave.

The peak is the highest point in the wave. Sort of the loudest moment in a wave. Sound engineers often say that something is “peaking” or “clipping”. It means that the sound of the recording is trying to go beyond the loudness limit. You can see it on your meters; they will go red.

Or in your waveform. Instead, of a nice, round one, you will have a squashed square. You can see (and hear) it in a lot of modern music and movie mixes. Everyone wants it loud and big. Last week I went to see something in IMAX. The trailers were so loud that people in the audience were covering their ears. A bit of dynamic range would not hurt.

Anyway, remember that this is only a graphic representation of a sine wave; sound does not look like that.

The trough is the lowest point in the wave. Or the quietest moment in a wave. So the wave will always be in motion, from peak to trough. If you want to calculate the stretch from peak to a trough it is always twice the amplitude of a wave. Amplitude is a sort of strength of a wave. It can represent loudness.

RMS or root mean square is an average amplitude of sound waves. So, when you listen to a song on YouTube, your ears, and your head, do a little compression to the sound. They soften loud sounds a bit and protect your hearing.

For example, if you are in a dance club, the music won’t sound as loud after a while. It can still hurt your hearing, though. Earplugs are the answer. You can describe the RMS as “what your ears hear”. Not a mathematical representation of sounds, but human. Remember that our ears can pick up the softest sound and the loudest bangs.

All that is mechanical action and our “defence systems” help to make sense of all these crazy sounds around us.

In a longitudinal description of a wave, compressions are particles bundled together. These are the regions of high pressure. Sort of like a train during busy hours. We, people, represent the particles.

Rarefactions are opposite to compressions. The pressure is low, particles are spread apart, and there is a lot more room for activities.

Physics of waves are fundamental to your understanding of sound, music, recording and many other aspects of your life. From now on when you think of sound remember always to have two pictures in your head, one as a sine wave and the other one as a mechanical, long wave.