The sound is a part of life. It is around you when you wake up; it is there when you go to sleep. Most of the animals communicate with sound. Humans use it to express their emotions, artistic creativity, and ideas.

A powerful speech, a roar of an engine in a sports car, chanting crowd during a big sports event. All kinds of sounds from quiet to deafening can have a big impact on us.

But what is sound?

Where does the sound come from?

And why should you care?

These questions puzzled people for millennia. But thanks to development in technology, now we can answer a lot of them.

Not all of them, though.

I want to give you a short introduction to the science behind the waveform, frequency and sound content. I hope it will inspire you to dig deeper into a wonderful world of sounds and noise. 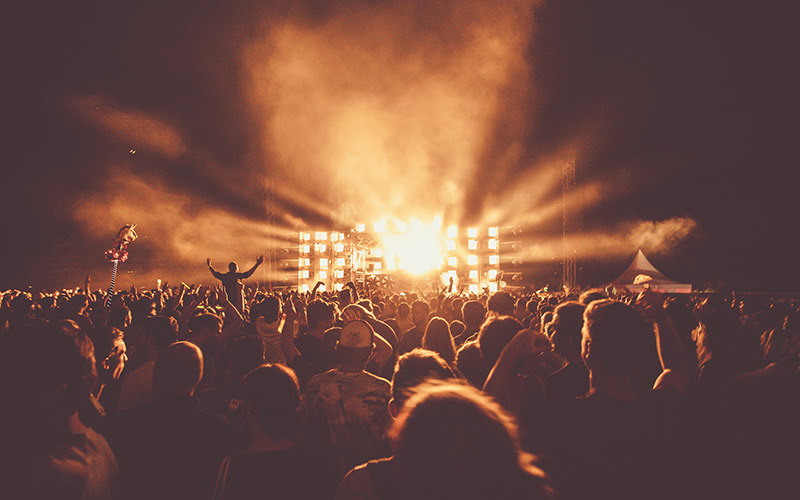 We describe sounds as changes in atmospheric pressure.

Compressed air molecules cause the change to flow in the form of the wave through the atmosphere.

Molecules do not move with the wave. They only compress and decompress as the wave moves through a medium (air, water, and others) over time.

There is a difference when sound moves through water and air.

And because water is denser, sound travels much faster.

A waveform is a graphic representation of that journey.

But for now, don’t worry about it.

Amplitude in the easiest. It is the loudness of the wave, the value from negative to positive peak.

Frequency is the rate of the vibrations in given time. Higher frequency equals higher pitch.

Velocity is the speed of sound. It is approximately 344 m/s (1120 ft/s) through the air at 20°C (68°F). The speed is temperature dependent, and when it gets hot the sound travels faster.

Wavelength is a physical distance between the start and the end of one wavelength cycle.

Harmonic content is the spectrum of frequencies called overtones.

Many frequencies create a sound, not just one.

Unless it is a single frequency sound.

The envelope is a characteristic variation that happens over time to played sound.

Envelope describes how quick sound makes a noise, how long it lasts and how fast it quiets downs.

What is up with Noises? (The Science and Mathematics of Sound, Frequency, and Pitch) is a great video that explains sound science in more detail.

Loudness is a general characteristic that we describe a sound as either loud or quiet.

But what is the measurement of loudness?

And what is the human threshold of withstanding loud sounds?

Do you remember last time when you went out to a live gig and the next day your ears were ringing?

Yes, it means it was too loud.

We measure loudness in the decibel or dB. There are a lot of variations, but the most common is sound pressure level SPL measured in decibels.

For example, a quiet conversation can be around 40dB, but a close up a jet engine is around 160dB.

Decibel is a logarithmic value that articulates differences in force between two levels. SPL is only one unit of measure, and there are much more such as voltage V and wattage W. It can get a bit complicated.

You can use SPL to describe loudness. It describes the built up of acoustic pressure in defined space, like a room.

Sound mixes in studios have the reference set between 79dB to 85dB.

Gunshots are around that barrier. That’s why you can see people wearing

noise-cancelling headphones at a gun range.

It is important that I mention human ear’s average sensitivity to different frequencies at various levels.

We describe this effect as Fletcher-Munson curve.

It is one of the studies that try to explain our perceptions of sound.

Our sensitivity to certain frequencies will make some sounds more dominant over the others. Even if they have the same loudness level.

For example, a 40Hz tone has to be about 6dB louder than a 1kHz tone at 110 dB SPL so you can perceive it with the same loudness.

We are more sensitive to sounds that are in a spectrum of a human voice.

The loudness can also deceive our perception of pitch.

Sounds with certain frequencies will overshadow other sounds. For that reason, EQ and frequency filtering are such a powerful tools when it comes to mixing.

Ok, so you need to hear a sound first. Sound pressure waves arrive at our ears where they journey as electric impulses to our brain.

The human ear has three basic parts, the outer ear, the middle ear and the inner ear.

gathers and transports sound to the middle ear. It includes Pinna (ear flap) and approximately 2cm long ear canal. It protects the middle ear from the damage and delivers sounds to the eardrum on the border with the middle ear.

transforms sound pressure energy into internal vibrations and compression wave. It contains an eardrum and three bones, the hammer, anvil and stirrup. Eardrum’s membrane sets off the bones. It transmits the vibrations to the fluid of the inner ear as a compression wave.

The human body is sensitive even to the most delicate sounds.

The frequency range of hearing is between 20Hz to 20000Hz.

Any frequency below 20Hz we call an infrasound and anything above 20 000 is ultrasound.

The barriers to watch out for are the threshold of hearing, feeling, and pain.

The loudest sound possible is around 194dB.

But you will lose your hearing at 180dB!

Even if you are going to a gig, some earplugs can make the music more enjoyable as you will hear it clearer.

And you won’t have to listen to drunken people singing around you.